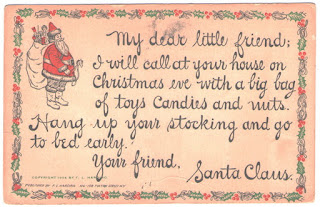 This sounds like a threat.  HANG UP YOUR STOCKING!  GO TO BED EARLY!  If you don't, NO NUTS!  Back in 1904, I guess telling a kid he wasn't going to get any nuts, much less candy and toys, must've scared the pants off them. 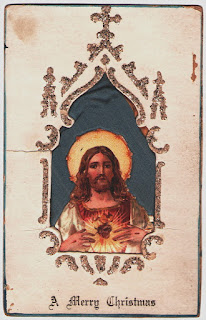 The area that is behind Jesus' head is actually a piece of material.  There's nothing to indicate if there's anything special about it, I guess it's just there to give a little depth.  Or it could be the real Shroud of Turin, proving once and for all that the one everyone thinks is the Shroud is, in fact, not. 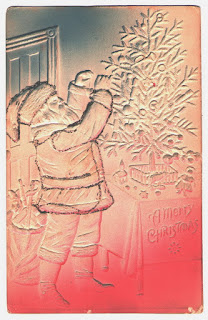 The entire card is embossed.  The glitter outline may have been added later by someone armed with glitter glue and a short attention span.  There's no stamp on the card but it tells you to affix a one cent stamp for domestic and Canada, two cents for foreign, obviously before someone decided that the US is a foreign country as far as the post offices of both countries are concerned. 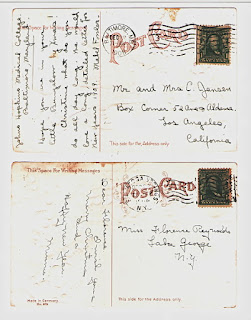 Back in the day, you could send your mail to a box at the corner of 52 Ave. & Aldama in Los Angeles and it would be delivered to Mr. and Mrs. Jansen.  I'm sure the box was cozy and warm.  To get your postcard to Miss Florence Reynolds, all you had to do with affix a one cent stamp and send it on its way to Lake George, New York.  Everyone at the post office knew Miss Florence. 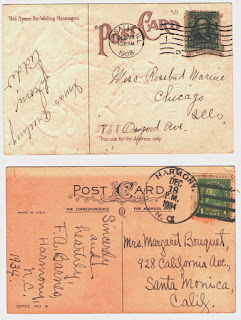 Don't you love the name Rosebud Marine?!  Different kind of handwriting on the card from F.A. Barnes, doesn't really look like a man's handwriting.  Still cost one cent to mail a postcard in 1934. 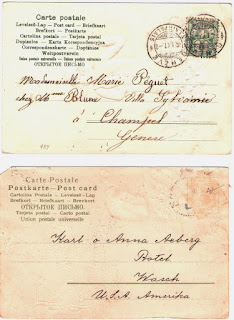 I am completely in love with European Christmas postcards and the handwriting of one Elise Dumont is absolutely incredible!  European postcards, however, force you to write your notes on the front.  Whoever sent the card to the Aebergs wanted to be certain it reached them:  U.S.A. Amerika. 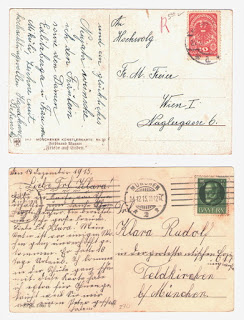 The front of the card addressed to Fr. M. Freier shows a baby Jesus standing with arms outstretched, wearing a red velvet robe, with "Gelegnele Weihnachlen" written across the bottom.  I'm sorry, but trying to pronounce that makes you sound like you're choking.  Klara Rudolf's friend should've used a bigger post card--her note is all over the front of the card, too. 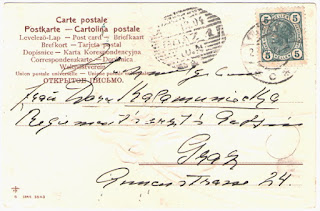 Not everyone back in the good old days (this one was sent in 1904) had delicate, spidery handwriting.  This guy must've been a doctor!

At some point in time I bought a big stack of antique Christmas postcards.  I guess I thought I was going to do something crafty with them but then my vintage costume jewelry obsession took hold and that was that for crafty stuff, and antiques in general.

I also found a bunch of vintage Mississippi postcards (because, you know, I love living here so very much), other state postcards, about 25 Monterrey Mexico cards (?), and reproductions of some very racist, I mean REALLY racist, postcards made by the Curt Teich Co.  They are very well known for their state cards--the ones with the name of the state in big block letters across the front--but in the early 50's there must have been a market for cartoon postcards with, for instance, a chubby little black girl and this cheery message:  "Oh--I is not!----It must be sumthin' I et!!  And of course there are watermelons growing at her feet.  I'm pretty sure I bought them just to get them off the market.  Sorry, but no pix--I didn't think it would be a smart idea to put this kind of stuff on my blog for all the world to see.
Bye!

A Feeble Attempt At Yet Another Blog Comeback 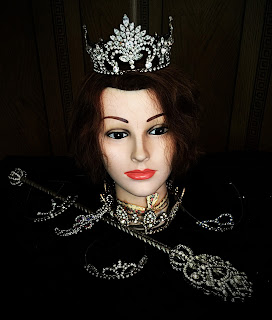 Don't freak out!  It's my homage to this year's International Tiara Day since I wasn't about to put that thing on MY head and parade around town looking like a crazy old lady.

I think I'm getting over Facebook--mainly due to me posting a great deal and no one acknowledging my posts.  The problem is that there is SO MUCH TRAFFIC on Facebook and unless someone is actively following your page it's just too difficult to set aside time to visit.  I have left than 100 "friends" by design since I don't friend someone unless I have something in common with them and the first thing I have to have in common is politics.  I do have a few friends that are on the other side of the fence but we sort of have an agreement that I won't comment on YOUR political posts and you stay away from MINE.  Yes, I have no problem singing to the choir and I have absolutely no desire to get into infantile arguments that usually end with the combatants calling each other idiots and blocking each other.

I realize that there's just as much traffic here in Blogland but it's easier to visit those blogs that you're interested in. 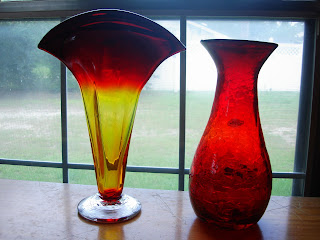 Posted by Vintage Christine at 8:37 AM 5 comments: 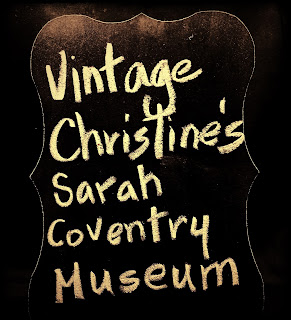 It's as if I've never been gone, right?

Of course life has changed but basically it's still the same--I'm older, not thinner, of course wiser, and depressed that Downtown Abbey is no more.

The reason for the photo is to reveal my latest obsession: Sarah Coventry jewelry.  I've been collecting it off and over the years and then a couple months ago I decided to dive into the 42 gazillion white boxes containing my collection, and discovered I have a lot--I mean A LOT--of Sarah Coventry jewelry.  And of course duplicates--A LOT--of duplicates, so I set about writing down what I had, finding out names and dates, and compiling it all on an Excel spreadsheet.  I was thrilled to see that I could still remember how to use Excel, although I'm sure the version I have on my computer is hilariously outdated.  But, it works for me.

I've become somewhat of an accomplished (in my mind, at least) jewelry photographer of late due to my involvement in vintage costume jewelry groups on Facebook, where everyone tries to one-up each other on how much of this or that company they own, and if it's a seller, they take really really really good photographs.  Through trial and error, using my iphone and an app called Aviary, I taught myself how to show off my jewels.  I'm out of the groups, however, due to the ridiculous amount of drama going on.   It's entertaining for awhile and then it just get downright nasty, and I get enough of that reading what the trolls write on Bernie Sanders pages.

Here's an example of my handiwork: 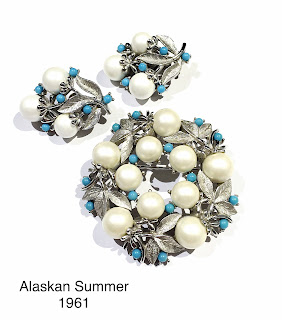 They're huge files, however, so I'm going to have to shrink them down if I actually manage to continue this blog.

I was impressed to see that Linda McKean is still blogging away, as are a few other bloggers from "the old days", and that inspires me.  Plus this will keep me off Facebook--I post a lot and hardly anyone reads my posts unless they have photos of the cat.  EVERYONE loves Boo! 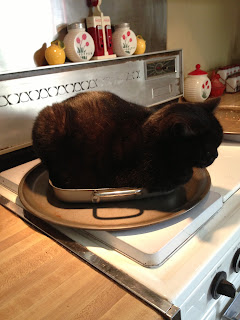 Two gorgeous bracelets.  The Fall colors bracelet is Juliana and the one with the pink/ yellow stones is Kramer. 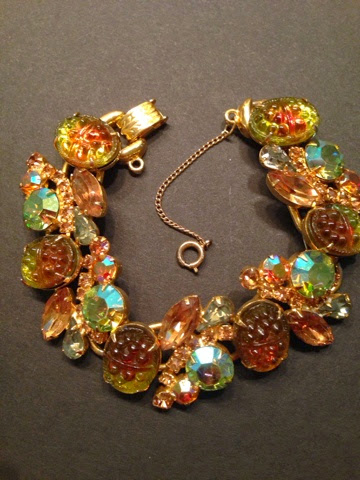 Posted by Vintage Christine at 5:17 AM No comments: 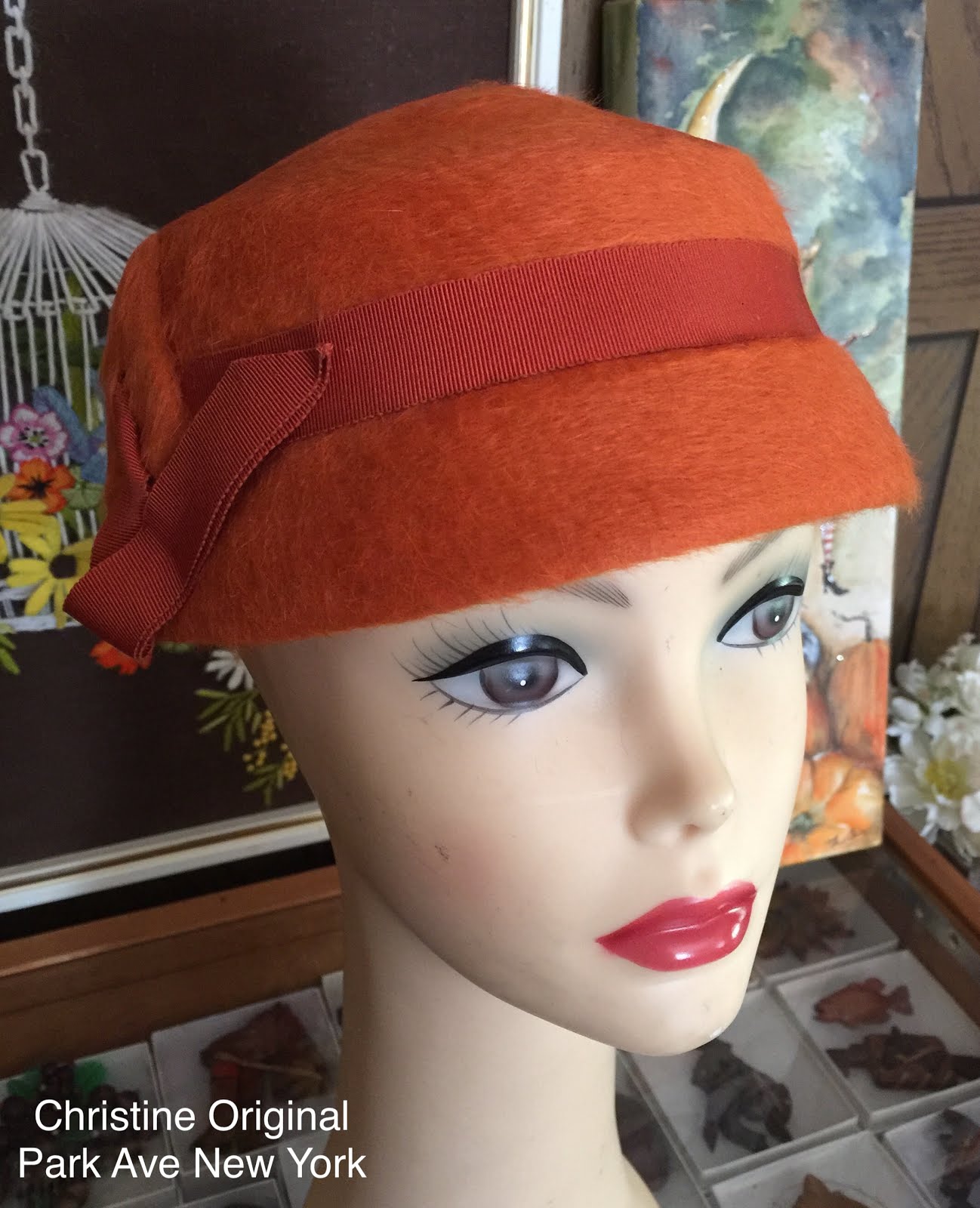 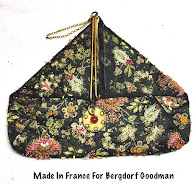 Made in France for Bergdorf Goodman 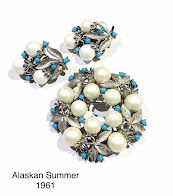